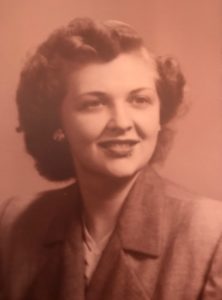 Ruth Laura Simmons Gladstone, 92, recently of Mount Dora, Florida, and formerly of West Friendship, MD and Brunswick, MD passed away September 6, 2018 after a brief illness.  She was married for 64 years to Edward A. Gladstone, of Brunswick, MD, prior to his death in 2013 and is happy and blessed to be with him once again.

Ruth was born June 24, 1926 in Washington, D.C. to the late William W. Simmons and Ruth Turner Simmons.  She grew up in D.C., roller skating down North Capitol Street and running around the White House, where her stepfather William Reeves worked as Head Gardener and Florist.

Ruth worked as an executive secretary at the General Accounting Office and later, the Bureau of Public Roads.  She married Edward Gladstone in November of 1949 and resigned from the government in 1959 to become a full-time wife, mother, homemaker and amazing cook.  Her Orange Crispie cookie recipe was published in two national cookbooks and her pound cake was legendary.  She also enjoyed needlework and had the most beautiful penmanship!

Always active in the church wherever she lived, Ruth sang in the choir, was active in the United Methodist Women and the Adult Bible Study class, taught Sunday School and VBS, and chaired the annual church bazaar.  While in Brunswick, she was also a volunteer Docent at the Brunswick Railroad Museum, volunteered regularly at the local food bank and was an Election Judge.

Ruth is survived by two children, Laura Reichard (Gary) of Mount Dora, FL and Bruce Gladstone (Brian) of Madison, WI, her brother William Reeves Jr. of Alameda, CA and her sister-in-law, Kate King of Campbell, CA.  She was preceded in death by her beloved husband, Edward, her son David Gladstone, her brother Robert Simmons and her sister Dolores Jenkins.  She is also survived by cousins Richard Mattingly and Andy Smith, daughter-in-law Virginia Gladstone, 7 grandchildren, 2 step-grandchildren and 4 great-grandchildren, numerous nieces and nephews, all who are so grateful for her role in their lives and sadden by their loss.

A memorial service, celebrating Ruth’s life, will be held on Saturday, October 6th, 2018 at 11:00am at Glenelg United Methodist Church in Glenelg, MD.

In lieu of flowers, donations may be made to Children’s International or St. Jude’s Children’s Hospital.