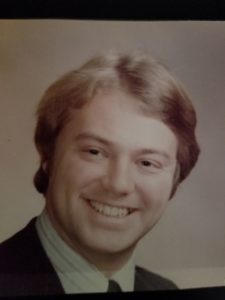 Steve is survived by his sister, April Johnson Briese, his brother in law Judge Shawn L Briese (retired), niece Amanda Briese and nephew Staff Sergeant USAF Travis R. Briese (wife Elizabeth) Steve is also survived by his huge “family” of friends who love him dearly. Steve’s ashes will be interred at Emmanuel Episcopal Church Cemetery in Rapidan, Virginia next to his parents Eula and Milton. In lieu of flowers, donations may be made in Steve’s name to the Steve Johnson Memorial Scholarship at the Alpha Tau Omega fraternity, University of Florida.
A memorial service will be held Saturday, August 18, 2018 at 2 p.m. at the Cathedral Church of St. Luke, 130 N. Magnolia Ave., Orlando. The Cathedral has a historical connection to Steve’s Virginia roots which Steve appreciated- a stained glass window in the narthex honors the grandson of Thomas Jefferson, Francis Eppes who moved to Tallahassee in 1826, and then to Orlando in 1869 where he was one of the founders St. Luke’s in 1881.
Please join us for a celebration of Steve’s life immediately following the service at the home of Tina and Mike Schrimsher. For more information visit loomisfamilycremations.com, or contact Clay Townsend 407-719-9866, Mike Schrimsher 407-810-3515; Mike Alley 407-405-0895.