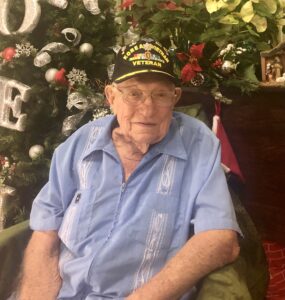 LTC Francis Valiant Young was born on March 4, 1930, in Brush, Colorado.  In 1948, he enlisted in the US Army as a Private First Class and was assigned to the 25th Infantry Division in Osaka, Japan.

He would go on to serve in the 27th Infantry in Korea, where he was awarded  the Silver Star Medal with (5) Battle Stars, the Bronze Star Medal with “V” Device (for Valor) and (2) Oak Leaf Clusters, all by the age of 21.  He was transferred to 11th Airborne Division and deployed to Germany and multiple US Military Bases, including Alaska and a tour of duty in Thailand.

From Private First Class he moved through the ranks to Lieutenant Colonel and was highly decorated for his dauntless courage, heroic actions and unremitting devotion to duty.  During his 23 years of duty he was awarded 32 total Medals, Commendations and Citations.

He lived life abundantly and traveled extensively. He maintained many friends through the years. He loved his family and enjoyed his many adventures with his great grandson, Cole.

He was determined to stay connected to his daughters during the pandemic. So at the age of 90, he learned how to FaceTime, which he did twice a day until God called him home.

He was preceded by Margaret Ford Young, his wife of 41 years; his parents, Leman and Dula Young; and sisters, Rosemary Hyatt Mattingly and Annie Starr.