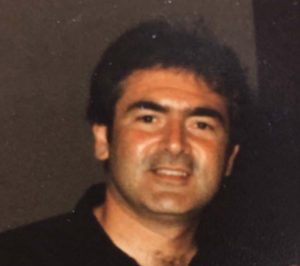 On January 30, 2019, Anthony Mark Caporelli, Orlando, Florida, died peacefully at home after a long and courageous battle with  cancer.
“ToeKnee” was born on May 23, 1954, the son of the late Anthony and Matilda Cimino Caporelli. He grew up in North Scranton, Pennsylvania, and attended Scranton public schools. He entered the Air Force in 1974, where he was a computer/electronics technician. After his service, he settled in Orlando. He earned degrees from Valencia Community College and the University of Central Florida. He enjoyed his years as a computer controls engineer at the theme parks in central Florida.
In 2003, he made a life-changing decision to return to Scranton to care for his ailing father and then his mother. He lovingly served the needs of his parents for many years. Everyone around him acknowledged and were grateful for his many special gifts.
ToeKnee’s passions included lifelong learning, completing a job to the best of his ability, connecting with people through comedy and laughter, and helping everyone with whatever he or she needed. He was a man of all trades, talents, and abilities. He leaves many friends in Central Florida and in Scranton, and will be sorely missed.
Anthony was also preceded in death by his brother-in-law, Charles Mattioli. He is survived by two sisters, AnnMarie Parry (Richard), Morton, PA; Nancy Mattioli, Scranton; and two brothers, Lawrence and John, Orlando. He is also survived by an uncle, aunts, and several cousins, nieces and nephews, and his beloved friend, Marcia Enos.
Funeral arrangements are private and at the convenience of the family. A Celebration of Toeknee will be held on Saturday, February 09, 2019 at Marlow’s Tavern in Winter Park from 4-7PM.